The drive for healthy rental homes has put tenant needs into the spotlight but now a new survey has exposed what Auckland renters look for in a property.

A Barfoot & Thompson survey of 1,000 tenants living in properties managed by the agency found that the number one factor for most (88%) in choosing a rental property is price.

This was closely followed by location, with 85%.

Outdoor space, a fully fenced section, and pets being allowed were also popular features, with each scoring over 40%. 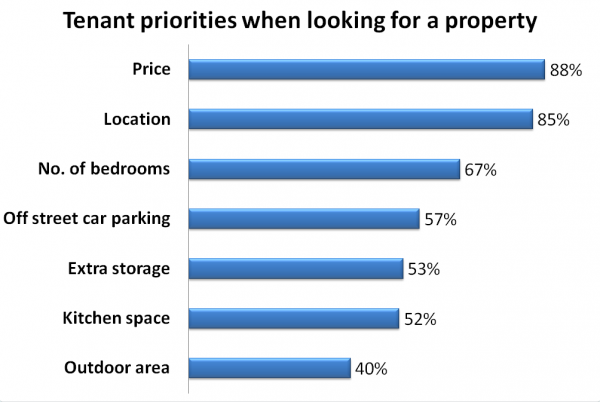 “These are the right amount of space, in a good location for work and schools, and something within their budget.

The survey also looked at tenancy duration and the results suggest that longer term tenancies are more common than often thought.

Tenants’ reasons for staying in a rental property beyond one year included the property having reasonable rent (64%) and being close to school and/or work (59%).

Barfoot said that tenancy duration and security is very important for both tenants and landlords, which is why it’s important to understand what keeps tenants happy in a property.

However, the survey also shows that a majority of tenants want to own a home of their own, with 59% saying they intended to buy in the next two to five years.

Barfoot was surprised at this result, but said that a number of factors could be behind it.

“Auckland’s housing market has steadied in the past few months after several years of rising prices – we also have around 30% more houses listed for sale than the same time last year.

“More choice is good for people thinking about buying. The unitary plan has also been confirmed, creating some certainty about future development in Auckland.”